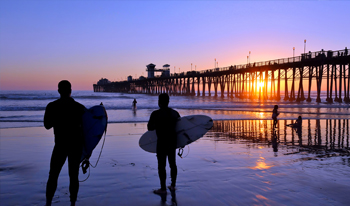 Our days and nights in San Diego are filled with fun things for you to do, see, learn and taste. Many of our events in San Diego are free. You'll also find a variety of events, something for every age group. After you call it a day, make a night of it! People come here from all over the world for the beaches, nightlife, culture, Spanish-influenced architecture, and the authentic Cal-Mex cuisine. But most of all, they come to experience the palpable feeling that the locals refer to as the SoCal vibe.

August 5: Shuck it up at Ironside’s Lady Chef Shuck-a-Thon, featuring six female chefs over six hours to benefit six charities.
August 6: Treat your family to the “greatest show on earth,” as Ringling Bros. and Barnum & Bailey returns to Valley View Casino Center with exotic animals and extraordinary performers in Circus Xtreme.
Mix and mingle and celebrate Coney Island: Visions of an American Dreamland, 1861-2008 at San Diego Museum of Art’s Culture and Cocktails summer soiree.
August 7: Clock out before 4 and head to Del Mar for Thievery Corporation’s free concert after the final race.
August 8: Learn to decode the Bard’s lingo at the informative Thinking Shakespeare Live! encore event at the Old Globe.Feast on sustainable fare and support local wildlife at the Farm to Bay Food and Wine Classic at the Living Coast Discovery Center.
August 9: Trade your ball gown for board shorts at the Luau and Legends of Surfing Invitational fundraiser for UC San Diego Moores Cancer Center.
August 12: Spend a night with Captain Jack Sparrow at the Swashbuckling Summer Movie Series at The Headquarters at Seaport, which presents a free outdoor screening of Pirates of the Caribbean: The Curse of the Black Pearl.
August 14: Long live a legend, as the San Diego Symphony’s Summer Pops series salutes Old Blue Eyes at Sinatra at 100.
August 15: Raise a pint in honor of craft beer at the Stone 19th Anniversary Celebration and Beer Festival, taking over the campus of Cal State San Marcos. It’s a toga party takeover in Little Italy at the Ferragosto summer night party at Amici Park.Add artwork to your weekend at the two-day ArtWalk NTC at Liberty Station, featuring 175 local and international artists.
August 16: Enjoy slapstick Shakespeare under the stars at The Old Globe’s performance of The Comedy of Errors. It’s sure to be a hot summer night at Sleep Train Amphitheater when country star Dierks Bentley takes the stage.
August 18: The show may be winding down but there’s still time to see your favorite “idols” on stage at the American Idol Live! concert at Humphrey’s by the Bay.
August 21: San Diego Magazine’s Best Of San Diego Party brings together the city’s top restaurants, wineries, and breweries for a night of sipping and sampling at Liberty Station. If you can’t get enough free outdoor films for the family, head to Santee Lakes for Movies by the Lake.
August 22: Sip while you shop at the Uncasked at Westfield UTC neighborhood craft beer festival in support of the San Diego Brewers Guild.
Add a furry friend to your family—or simply support animal adoption—at the Doggie Street Festival at NTC Park at Liberty Station.
August 25: Follow “one young man’s journey to be extraordinary” in the newly revived performance of Pippin at the Civic Theatre.
August 27: Feast on food and fashion in support of the San Diego Sports Medicine Foundation at Taste at the Cove, which this year recognizes community legend and longtime San Diego Charger LaDainian Tomlinson.
August 29: Shake it off with Taylor Swift as the-superstar takes over Petco Park for her 1989 tour.